There is a strong tradition of anti-Israel sentiment on the French left, most recently expressed in a parliamentary resolution, albeit quickly withdrawn. According to Bernard-Henri Lévy, this fits in with traditional socialist antisemitism. The French Jewish philosopher’s opinion piece appeared in the columns of his own literary magazine, La Règle du Jeu.

Metazin notes in its coverage of the piece that the author points out that by „socialism of fools,” he means antisemitism, following the example of former German Social Democratic leader August Bebel, who indeed used the term repeatedly. True, as he himself acknowledged, he took it from an Austrian liberal, Ferdinand Kronawetter, who associated it with the typical figure of the Viennese antisemitic movement, “the idiot of Vienna,” which was gaining strength in the 1880s. Lévy saw Bebel as a denouncer of the antisemitism fashionable among the early socialists. In fact, Bebel considered the antisemitism of the fools to be a flawed but useful phenomenon, because he thought that if they hated Jewish capitalism, sooner or later they would hate the capitalist system.

the leader of the largest left-wing party in France, “Rebellious France,”, tabled a draft resolution condemning Israel with the support of 38 of his fellow MEPs.

In it, he intended the legislature to accuse Israel of running an apartheid system. In the former South African system of racial segregation, whites and blacks were not allowed to marry, could not have romantic relationships, had to live in separate areas, had parks for whites, buses, etc. In Israel, of course, there is nothing like that, Lévy observes. On the contrary, the 2 million Arab residents are not restricted by the state in their rights nor in their relations with Jewish residents, the Supreme Court has an Arab member, and Arab parties are represented in parliament and are now the language of balance between the opposing camps of equal strength. Moreover,

the proposal is completely unfounded, although it would have called for economic sanctions against Israel on the basis of a diagnosis that is widespread in left-wing circles.

However, it seems that someone must have realized that the anti-Zionism even runs counter to existing legislation, and the text was quickly removed from the Parliament’s agenda.

But that does not reassure Lévy, because the case is not unique. In mid-July, when commemorating the infamous great 1942 roundup of Jews in Paris, in which 13,000 Jews were rounded up in the Vel’ d’Hiv stadium to be deported to Nazi concentration camps, the left-wing group leader somehow failed to mention in his remembrance that the people concerned were Jews.

The philosopher continues his article by placing current French political developments in a broader context.

The antisemitism of the left

And then there is the rise of left-wing antisemitism, which is absolutely shameless.

This was a strong current within the young Socialist Party at the beginning of the 20th century: Was it not common at the time for friends of Jules Guesde to call themselves „republicans, socialists and antisemites,” to join Drumont in berating „the youtres of finance and politics”? And wasn’t it Jaurès himself who, before the Dreyfus trial, wrote that „the Jewish race” was „consumed by a desire for profit” and that the socialists of the „old Catholic race” must „break” this „mechanism of robbery, lies, corruption and extortion”?

This current re-emerged in the ranks of the pacifist left at the height of the 1930s: The socialist Fernand Bouisson accusing Mandel of wanting war „like all Jews”… the radical Yvon Delbos, the Popular Front’s foreign minister, who explained that „Jews everywhere, driven from their homes, seek salvation in world war”… or the party leader Paul Faure, outraged by Blum, who „is ready to kill us for the Jews”….

These texts are quoted by Michel Dreyfus in two essays, one published in 2009 by Presses Universitaires de Rennes and the other in 2010 on the Cairn.info site.

This third crisis of liberal and democratic consciousness seems to be erupting today in a France that has learned nothing, forgotten nothing. Mélenchon insulting the Representative Council of Jewish Institutions in France (CRIF), marching with Islamists shouting “Death to the Jews,” or accusing a chief rabbi of killing a friendly government, is said to be “Corbynisation.” Yes and no. Above all, it is loyal to the dark side that even the most enlightened left-wing militants know haunts the memory of their parties and must be exorcised, not flattered.

The fate of the Palestinians

Then to the men and women of good will who no longer understand anything and ask the question, „What exactly is the fate of the Palestinians in Israel?”

Of the territories occupied in the 1967 war, there is already one, Gaza, where the accusation of apartheid is absurd, as since Ariel Sharon’s decision to withdraw in 2005, there is no Jewish population.

In the other, the West Bank, it takes a great deal of bad faith or stupidity, or both, to confuse the fight against terrorism with segregation.

As for Israel itself, a country which, according to its resolution, „since 1948” has been governed by a „single racial group,” people must be tirelessly reminded that it is a multi-ethnic and multi-religious country, where 2 million Arabs, Muslims and Christians enjoy the same economic, social and political rights as their fellow Jews; it must be said and reiterated that this is a parliamentary democracy, where this Arab minority is represented in the Knesset by several parties, one of which, Raam, is currently in the position of kingmaker, mediating between the centrist Lapid and his opponent Netanyahu; And finally, it is a state of law where there is no construction, no uprooting of a 100-year-old olive tree, or suspicion of discrimination that cannot be brought before the Supreme Court, where one in five judges is Arab, and whose justice no one seriously questions.

The evidence is endless. I will come back to it if necessary. The “socialism of fools” (August Bebel) must bow its head in command.

Goebbels was furious when he learned the photographer was Jewish 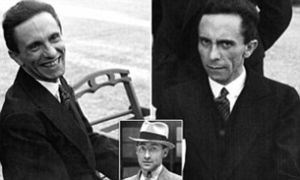 Alfred Eisenstaedt, a photographer for LIFE magazine, attended the League of Nations meeting in Geneva.