The Austro-Hungarian Haydn Philharmonic Chamber Ensemble started off the concert series in the renovated building. The highly successful, sold-out Sunday concert was attended by the descendants, who live in London, of the family of Philipp Schey, the man who originally built the synagogue, VAOL Vas county news portal reports.

After a complete renovation, the unique cultural heritage of Kőszeg is now open to the public with new functions and a rich cultural program. At the end of August, the Institute of Higher Studies in Kőszeg joined the national series of events of the Week of Synagogues with a two-day event, starting with the opening of the exhibition „A Kőszeg success story: the Schey family”

The fate of the building and the process of its renovation have already attracted a great deal of national and international interest. Its construction in 1856 was financed by Philipp Schey, who had risen from being a retailer in Kőszeg to the rank of a baron as a Viennese businessman. Descendants of the Schey family, from Austria, the United Kingdom and the Netherlands to the United States of America, have followed the developments.

The government decided to restore the complex and its garden in 2013, in preparation for the Holocaust memorial. The renovation itself was eventually carried out under the Kőszeg Kraft program. Following the repurchase and conservation, the project, which included the rabbinical buildings and the garden, started in the autumn of 2020 and was completed in January 2022. Thanks to the renovation, the synagogue complex will have a number of functions that fulfil a religious, cultural and public mission. After many years of absence, it can once again be used as a place of worship as needed.

According to the article in VAOL, the synagogue’s rebirth will reconnect the town of Kőszeg to the national and international bloodstream in an unprecedented way. This will make Kőszeg one of the Central European centers for heritage-based experiential tourism in the spirit of the Kraft program.

They will no longer be unveiling a Horthy memorial plaque in Szeged, for now 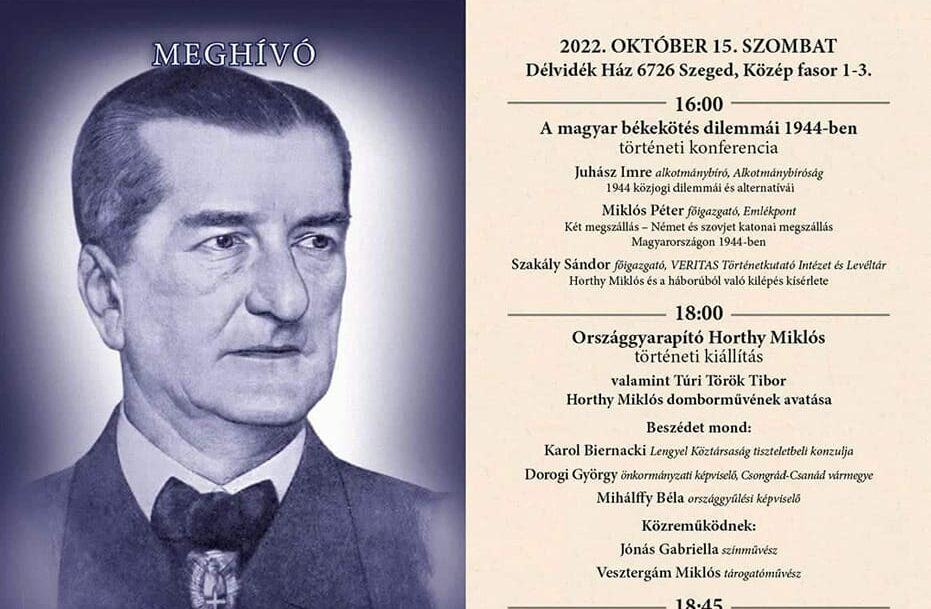 The unveiling of a memorial plaque in honor of Miklós Horthy by the Order of the Vitéz has been postponed in Szeged.