„We can’t be a gypsy country” begins the leaflet distributed by Mi Hazánk, which has recently landed in people’s mailboxes, index.hu writes.

The party bases this claim on the fact that the Roma population is doubling every generation, while the Hungarian population is „nearly cut in half.”

The party — whose slogan is „Hungary for Hungarians” — therefore wants to stop „Roma programs,” introduce segregation in education, curb having children for money (state subsidies), and even withhold wages

According to Mi Hazánk, the governments of Ferenc Gyurcsány and Viktor Orbán have both meant the death of the nation, the only difference between them being the pace at which this happens. Their fear of national death is somewhat contradicted by the fact that the next paragraph of the leaflet contains the party’s usual anti-vaccine rhetoric of recent months. 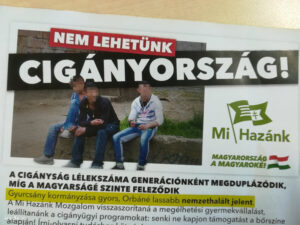 It is three times more deadly than the coronavirus itself, according to the U.S. Centers for Disease Control and Prevention. We therefore say to Viktor Orbán: Leave our children alone!

According to index.hu, however, after about 15 seconds of searching the internet, the official website of the U.S. Centers for Disease Control (CDC) was found, which contains a passage on this very issue:

“The benefits of COVID-19 vaccination outweigh the known and potential risks. Get a COVID-19 vaccine for children ages 5 years and older as soon as you can.”

The party’s leaflet also resolves the CEU vs. Fudan dilemma: „Let there be neither.” The brochure talks about the Mi Hazánk agenda, which would include holding a referendum on EU membership and banning LGBTQ marches.

Thousands of people voted again this year for the Hanukatalizator (“Hanukkah Catalyst”) Award, organized by JCC Budapest – Bálint House and awarded to the most active and inspiring members of the Jewish community.