The Russian „special military operation,” originally planned for three days, has lasted 210 days. By ordering a partial mobilization, Putin himself acknowledged that the operation had failed to achieve its objectives. The war has escalated and entered a new, much more dangerous phase.

The end of the „special military operation”

Taking stock of the “results” of seven months of war, we see the decimated and crippled masses of the male generations of Russia and Ukraine, already facing serious demographic problems, decimated and crippled on the battlefield, their lives and destinies torn apart, their settlements destroyed, and millions of Ukrainian refugees who preferred not to wait to be “liberated.”

With the Russian attacks on Ukraine’s critical infrastructure, what our senior editor Robert C. Castel warned earlier this year was already happening: With all other options out the window, the Russian army will try to win by breaking the Ukrainian people.

„Consider these as warning blows”

– Putin said coldly of Russia’s attack on the Krivoy Rog dam, which flooded part of the city and left hundreds of thousands without drinking water.

But it is not only Ukraine but Europe that is facing a very difficult period.

Russia has touched an energy weapon that will be felt across the continent. Moscow is doing this not just because of sanctions, but primarily because of Western military aid to Ukraine.

In recent months, Russia has been short not of material resources, but of demonstrable military success.

As enthusiastically as the Russian Ministry of Defense reports every day about the Western weapons destroyed in Ukraine, somehow they found their way to the front line and allowed the Ukrainian army to launch a successful counterattack against Russian forces for the first time in the war.

After the Kharkiv fiasco, even Russia seems to have realized that this kind of “success propaganda” can no longer be sustained. 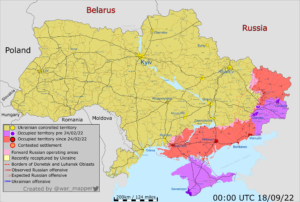 Escalation for the sake of de-escalation

The Russian leadership saw the escalation of the war („escalate to de-escalate„) as the solution to the problems of the Russian army in Ukraine (e.g., chronic shortage of infantry).

With Putin’s partial mobilization order and the “referendums” on joining Russia announced in the Donetsk and Luhansk People’s Republics and in the provinces of Kherson and Zaporizhzhya, the war entered a whole new phase.

This is the most dangerous phase so far, after which it is unlikely that the war will end in the foreseeable future.

One of the undoubtedly most gratifying benefits of the current Russian escalation is that the Kremlin has „backed up” its territorial claims with nuclear weapons. As Russia expert András Rácz has pointed out, the public part of the current Russian strategic documents states that in the event of a conventional attack on Russian territory, nuclear weapons can be used if the attack „threatens the very existence of Russia.” And these territories will soon be „officially” considered by Russia as its own.

Putin foreshadowed this in his speech in Samarkand, when he said that the war plan for what he called the „special military operation in Ukraine” would not be subject to change.

However, the Kremlin has repeatedly demonstrated over the past six months that it is very flexible in the way it manages its objectives, depending on the current combat situation.

As a reminder: What was the purpose of the „special military operation” in the beginning?

Russian plans for Zelensky almost succeeded in the first hours of the war, when Russian special forces came close to liquidating the Ukrainian president and his entourage. At the same time, Russian troops moved in to “invade” Kiev, but thanks to stubborn Ukrainian resistance (and Western anti-tank weapons, vital in the early stages of the war), the Kremlin decided to withdraw its troops from the Ukrainian capital.

Shortly afterwards, Putin himself admitted to Israeli Prime Minister Naphtali Bennett that forcing a change of power in Ukraine and demilitarization was off the agenda.

As far as the demilitarization of Ukraine is concerned, there are now almost 600,000 Ukrainian soldiers in arms, many of whom are fighting with Western weapons, have received Western training, and are being helped in their fight by Western intelligence and Western advisers. Thanks to the West, Ukraine is stronger and better equipped militarily than ever before. And the case for NATO membership has become a moot point. As Henry Kissinger has pointed out, the level of Western support has made Ukraine, if not de jure, de facto part of NATO.

“One way or the other, formally or not, Ukraine has to be treated in the aftermath of this as a member of NATO”

The „de-Nazification” of Ukraine has also been a one-sided success. Although some of the notorious Azov militia were successfully destroyed or captured in Mariupol, many of them were later released under cover of a prisoner exchange, despite the outcry of Russian nationalists. All of the members of the group had previously been scheduled to stand trial, and there were no reports of anything other than that they would be punished (i.e., executed) in an exemplary manner.

So, of the originally stated objectives, one remains, the capture of Donetsk and Luhansk (which has been changed to include the provinces of Kherson and Zaporizhzhya). With the announcement of the referendums, the Kremlin seems to be planning to declare the parts of the Donetsk, Kherson and Zaporizhzhya provinces that have not yet been occupied as part of Russia, which is interesting because the Ukrainian counteroffensive recently forced the Russians to give up Izium, which was essential for the capture of Donetsk.

And without the recovery of this key city for the control of Donbas, there is no way that the Russians can achieve their current (!) publicly stated goals in the near future.

The situation is similar in the case of Kherson and Zaporizhzhya. The Russian army only controls part of the provinces and is geared to defense, and this will not change with the mobilization of a reserve force, which will presumably be used for defensive tasks rather than for complex offensive operations (which often even Russian regular forces have problems with). And mobilizing, equipping and properly resupplying the 300,000 troops mentioned by the Russian defense minister will be a further serious challenge to the already overstretched and underperforming Russian logistics system. 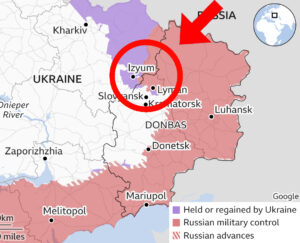 The Kremlin often says it wants to end the fighting and blames the Ukrainians for the failure of negotiations. But a basic condition for peace talks is a minimum of trust in the other side. By setting new targets and constantly changing its previous demands, the Kremlin is undermining the prospect of peace in Ukraine.

The (real) end goal of the war on the Russian side therefore remains vague and ambiguous, just as it is not clear what the Kremlin would be satisfied with, what it would consider a victory for itself.

One thing is for sure: the Russian leadership is in no hurry. At least at the level of communication, it is trying to give this impression, but the current escalation is also pointing in that direction.

Putin’s people feel that time is on their side.

However, the Ukrainian leadership and the Ukrainian people, buoyed by the success of Kharkiv, feel the same way. Ukraine is more determined and more confident than it has ever been.

The uncertain timeline of the conflict and the territorial claims being made suggest that the Kremlin is engaged in a „perpetual war” in Ukraine, much like the United States, which has unleashed a series of unintended, profound (often catastrophic) changes as a result of its post-9/11 war on terror. To date, Washington has not been able to fully extricate itself from the situation it has created, and it is likely that Russia will be in a similar situation for a long time to come. That said, it is too early to predict the long-term consequences of the current conflict, both locally and globally.

However, it is already clear that the war in Ukraine has weakened Russia’s influence in the region around it.

One need only think of Syria, from where Moscow has been forced to shift considerable forces, leaving Israel greater freedom of action against Iranian forces, thanks to which pro-Iranian militias have reportedly „suspended” their activities in the country. It is no coincidence that Azerbaijan felt that now was the time for a new crackdown on Armenians, even though, as we have reported, Russia is bound by treaty to defend Yerevan. The Kyrgyz and the Tajiks also clashed, without Russia being able to put things right between them. But we could also mention Kazakhstan, which is pushing its own agenda with Chinese backing, or Turkey, which is flirting with the occupation of more Syrian territory.

What is clear, however, is that while the Kremlin is willing to tolerate these losses of influence, it is prepared to go to the wall on Ukraine.

All this suggests that a ceasefire in Ukraine and peace between the two countries is further away than at any time since February 24.

Has the Azov group really changed its Nazi stripes? 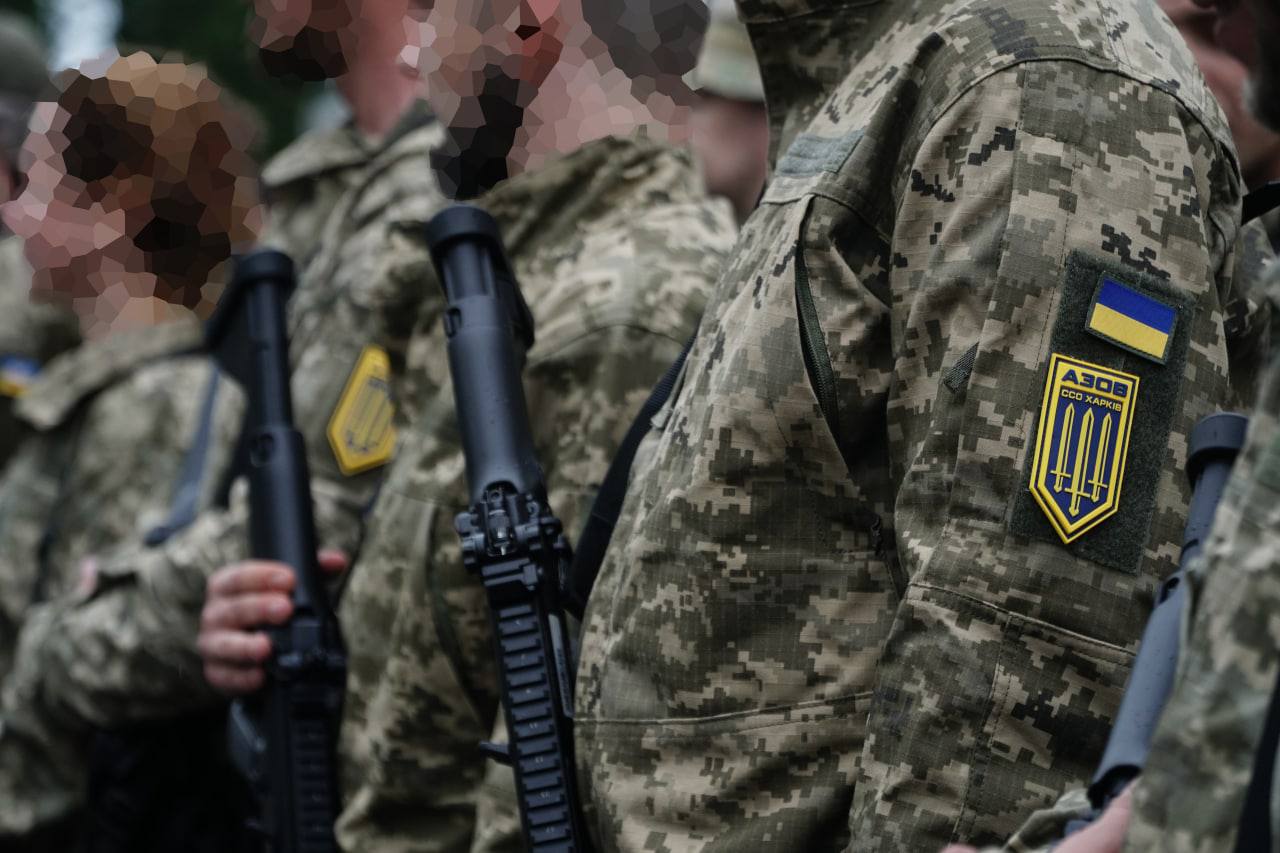 The wolf may change its fur, but not its nature.